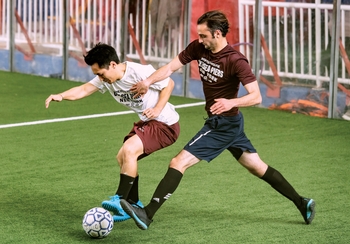 All Adult Soccer league players must be fully vaccinated. Players must continue to wear protective face masks while in any Chelsea Piers common area. Face masks can be removed while playing on the field.

GAME TIMES VARY WEEK TO WEEK FOR EACH TEAM

Forfeit Notification:
If you know in advance that your team is going to forfeit, you MUST contact me by 2:00pm on the day of the game at ksookhan@chelseapiers.com. It is not considered a notification unless you receive a reply. If your decision is not made until after 2:00pm, you should still try to reach out to the Soccer Department and we will make the efforts to contact the other team. If we can reach them in time to keep them from showing up, no extra penalty. If you do not do this, your team will be eliminated from the rest of the schedule.

Divisional Relegation (applies to the next season)

Field House Staff reserve the right to ask players who receive a Red Card / or Two Yellow Cards to leave the facility.

At the end of each season, a Golden Boot Award will be given to the player who has scored the most total goals WITHIN EACH DIVISION. Therefore, there will be an award given for the highest scorer in the PREMIER Division, Intermediate 2nd, Intermediate 3rd, Over-30, and Co-ed Divisions.

Web & Computerized standing are calculated Point, Wins, Goal Differential, [but, the web page standings are not completely accurate in determining goal differential from top to bottom, and the spread sheet standings kept at the Field House do not take into account head to head].

Final Fixtures are determined for possible playoff eligibility are exact; Points, Wins, Head to Head, Goal Differential. Teams with same points will be decided head to head before goal differential at the conclusion of the regular season. The only variable to the above would be similar points via ties over losses.
Generally, teams qualifying for the playoffs are as follows;

Chelsea Piers does not carry accident/medical insurance for any of its participants. Each participant is responsible for their own insurance.

Chelsea Piers reserves the right to institute new rules or to change existing rules for the betterment of the league.